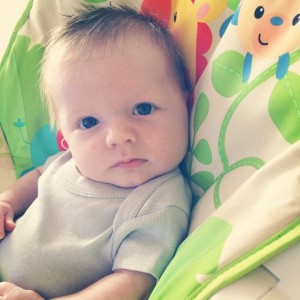 How are we already nine days into August? The last few weeks have absolutely flown by, and I can honestly say they’ve been some of the most challenging but best weeks of my life (sleep deprivation and dirty nappies aside). I’m afraid I’m going to indulge in a lot of baby talk in this post, so if you’d rather stick to general freelance chat, may I suggest having a browse of some of the Day In The Life Of A Freelancer posts?

If you’ve read my previous post on pregnancy and pre-natal depression, and the struggles and concerns I had, you’ll maybe understand why it’s such a huge relief that parenthood has been so, well…lovely. I have to confess, I’ve become a bit of a mumbot and I’m completely in love with Oscar, which has taken me by surprise a little as someone who wasn’t really that maternal before. In all honesty, after struggling during pregnancy I think my family, Pete and I all thought the first few months would be really hard for me, but it’s all come surprisingly naturally.

Obviously, it hasn’t been entirely rosy all the time. Labour was traumatic, complicated and took three days, and both Oscar and I ended up staying in hospital for almost a week after his birth. For about two weeks afterwards, I was pretty traumatised by the experience, however in retrospect staying in was a blessing as we really benefited from lots of time with the brilliant midwives at Frimley hospital. I honestly don’t know how first time mums can cope in those first few days if they’re ejected just a few hours after giving birth. Having that hospital stay as a buffer has undoubtedly helped me settle into motherhood much easier.

Once we left hospital, those wonderful baby blues hit for a few days, although these were nowhere near as bad as how I’d felt during pregnancy. But since then, it’s been kind of brilliant – and that’s largely down to getting lucky in the baby lottery with this little dude. We’ve been really fortunate that he’s a really chilled little guy, and he’s been taking naps during the day and sleeping pretty well at night. We’ve started to get him into the routine of going down at 7pm and waking for feeds at 11pm and around 3am, which means I get a precious few hours in the evening to relax with Pete and do a little bit of my own stuff (which suits my introvert nature perfectly). Although I’m planning to take a few months off before properly returning to work, I’m finding that keeping my finger in the odd pie and doing some planning for the future of my business has helped me feel ‘normal’ much faster. Which is why this blog has undergone a little update/spruce. I reached a point at four weeks when I realised that all I could talk about was Oscar and baby stuff, so being able to do a bit of brainstorming for work has helped me feel like I could potentially hold a half-normal conversation again some point soon.

It’s hard to explain how different life is, but also how not a huge amount has changed. Thanks to the anxiety and depression I went through at the end of pregnancy, my expectations for the first few months were pretty low. I thought I’d be a bag of nerves and stress, struggling with sleep deprivation and unsure of whether I’d be able to bond. In reality, it’s all come surprising naturally. Dare I say it, it’s been fun! I’ve laughed more in the last few weeks than I probably have in years. I’ve probably cried more too, but the happy times outweigh that. I’ve definitely bonded with him, and fallen in love with my husband even more than before. Another concern for me was whether it would put a strain on our relationship which I really cherish, but seeing him with Oscar has only further strengthened it. I think having the support of him, and both my family and his family, has made the transition much easier.

On the topic of sleep deprivation, it’s a bitch – but I’ve actually found it easier to cope with than the shattering exhaustion of pregnancy, which never let up (something my mum guru and friend Leanne told me about but I didn’t fully understand until now). At least now a quick 45-60 minute nap usually leaves me feeling much better. Obviously this is partly because of being lucky that he doesn’t suffer from colic at the moment, which makes sleep so much harder.

I don’t want to paint an entirely rosy picture, but I also wanted to share a positive story after a pretty negative pregnancy and labour. There have been challenges along the way. He had jaundice early on and I had to have a blood transfusion (we looked like Bart Simpson and Caspar the ghost together) and due to lots of issues with breastfeeding we spent the first few weeks feeding him with a mix of expressed milk, formula and straight from the breast when I could. By the time we reached four weeks, we switched to formula only, and it’s a decision I’m really comfortable with now – and Oscar is thriving on it. It’s also meant that Pete and both of our families have been able to feed him and have lots of bonding time with him, plus it’s given Pete and me the freedom to have a couple of dates while Oscar’s doting aunts or grandparents look after him. It’s a personal choice and I have a lot of admiration for those that do breastfeed for longer, but for us the decision to switch to formula only was the best one. It wasn’t the easiest decision to make though – especially as there’s still a lot of guilt placed on those that don’t breastfeed. Being a mother has definitely helped me be more assertive and strong about my decisions though, something I’m hoping will apply to work too (I’ll also be using some of these tips from Hayley’s post).

On the freelance front, having a baby is a pretty great way to have an enforced break from things – and gain some clarity. When I can, I’ve been filling a notebook with lots of ideas I’ve got buzzing round my brain. While it’s tempting to start a few new projects, I’m trying to hold off and do a little more development and planning. I’m also using feeding times to listen to some audiobooks, including The Big Leap which is really opening my eyes to ‘upper limits’. I’d really recommend reading it if you feel like you sometimes self-sabotage when things get ‘too good’. In fact, I’m trying to apply the principles now as I feel very lucky with Oscar and keep expecting a big dose of bad luck to come along. Arguably I had that bad luck with the pregnancy and labour, so perhaps he’s the pay off? I know as his naps in the day start to decrease, it will get more challenging – but I’m also excited about the smiles, milestones and bundle of new experiences that come with it.

Do you have any recommendations for other great business reads/listens? Let me know in the comments!

So, that’s my first baby proper babble. I’ve got some more posts coming up soon which aren’t baby related, so don’t panic – I’m hopefully not going to become a total baby bore.

Are you a parent? What did it teach you about yourself? Did it help you develop any new skills?