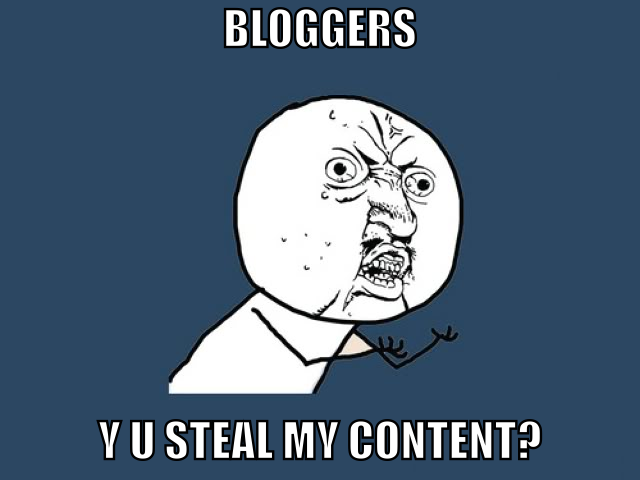 In general, the world of blogging is a fairly friendly one (depending on your sector – certain sectors have a reputation for being quite…shall we say ‘passionate’?)

Possibly one of the worst things you can do in the blogging world. There’s nothing more annoying than working hard over a blog post…only to find out someone else has just copied and pasted your content into their own blog.

Oh, and it annoys Google too – so you’ll get penalised for your lack of originality.

On a similar note, @missnatwilliams raised the point on Twitter that some bloggers (often the new or naive) use images without a) linking back or b) crediting the original photographer. If you’re unsure whether you can use an image, it might be worth sticking to your own images, or using sites like morguefile.com, where you don’t have to credit.

Ever looked at the #PRRequest Twitter hashtag? While it’s been used in the past for PRs to keep tabs of what journalists are looking for for upcoming features, it’s used increasingly for people to grab a freebie. I’ve even seen one blogger (with a very small following) requesting a free buggy.

I’m not averse to free sample or review products, when suitable. If it’s relevant to your blog or a feature piece, great! But if all your content comes from PRRequests, it suggests you’re not doing any research yourself. And reliance on free products means your blog will be exactly the same as thousands of others.

When I tweeted to get people’s views on bad blogger habits, a lot of people cited too much self-promotion – especially on Twitter.

Here’s what a few of them had to say:

@nuttycow “continue self promotion on twitter. A pet peeve. Link once, maybe twice. Not every hour for 5 days.”

@amylane “…RTing every entry to their competitions, jumping on the bandwagon for the sake of it!”

@sianysianysiany “Promoting the same blog post four times in a day for their ‘international fans’. Whatever love, you’re from Bolton.”

It’s fine to promote your blog. Essential even. But one or two well-timed tweets a day will do it, rather than one every single hour. If it’s a good enough post, you’ll get RTs and they’ll do the promotion for you anyway.

Also, don’t forget to be nice to everyone – no matter how big your blog gets. Most of the successful bloggers I’ve met are wonderful and grounded. But a few get to the point where they demand cars for press days.

At Cybher last weekend, one of the most interesting bits was when Jess Markwood from Aigua Media explained that not everyone can blog. It’s a common myth that anyone can blog. But the reality is, most successful bloggers write engaging and original content and keep an eye on their spelling and grammar. My grammar and spelling is by no means perfect, but that’s what proof reading and spellchecker is for…

This might be more of a case of things that annoy me rather than bloggers in general, but the rise in Pinterest and Instagram round up posts is a little odd. They’re pretty, yes. But would you be interested if someone did a weekly blog summary of their tweets? You’d probably just follow them on Twitter instead if you wanted to see that, right?

Are there any bad practices you’ve seen in the blogging world that I haven’t mentioned?