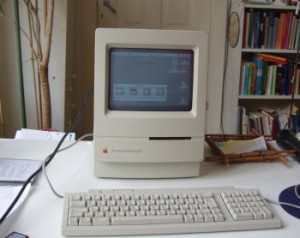 This week, I’ve got a guest post from Ebunola Adenipekun, who pays tribute to Steve Jobs

Today feels like a Diana, Princess of Wales moment for the Web 2.0 and 3.0 generation. So many people seem to be touched by Steve Jobs’ passing. Here are some thoughts on his contributions to the world and the legacy he leaves behind…

I remember being one of the first schoolchildren to use Apple computers in Liverpool in the late ’80s/early ‘90s. I only had five to 10 minutes a week to use it, because it was the only one in the school! How times have changed! When I really think about it, what a privilege it was to be a tester of what would be one of the most innovative products of our time.

This computer, in contrast to the few others that were around, had colourful graphics and was child-friendly. In contrast, my family had possessed an Amstrad, and in retrospect it didn’t compare – it was code-heavy and not about the graphics!

The co-creator of the Apple computer Steve Jobs had an unusual start in life. He was adopted, not by his biological mother’s first choice, but by a couple who didn’t fit the profile she was after. But their promise to get him into college put her mind at rest.

Going to university isn’t the only option

There’s a lesson right there – always think about what’s best for the next generation. The offspring might not realise it as soon as they’re old enough to, but they will realise in good time, that setting them up for the best start in life is half the battle. And Jobs did get into college, a good-enough college, but the story as we know, does not end there. Jobs was a technological maverick. His commencement speech at Stanford University illustrates this well. He spoke about being a college dropout (gasp, horror!), but managing to sneak into the classes that appealed to him.

Too often, despite our massive potential, we humans toe the line, wanting to get into the best universities, get the best results, to result in an afore-manufactured well-paid job. While there is a place for that, often, success and value are about passion, desire and determination. Getting a great result at a top university is just one way of expressing those three  qualities – but not the only way. Steve Jobs showed that.

Through taking a tailored, not well-trodden path in life he made his own mark, he paved a way for others. I hope I’m not sounding idolatry. That’s not my desire, but I am pointing out that he helped to shape technology today. May I be so bold to say I doubt Facebook, HTC, Google and other technological brands would be here today without Jobs and Apple to pioneer. We all should take our own path, and it may make the way easier for others too.

I’ve learned from Steve Jobs to:

Steve Jobs, you did a lot. Rest in peace.

Ebunola is very much a music lover, avid reader, writer, artist and Liverpool Football Club supporter. You can find her on her blog  and on twitter